“Clean hydrogen is key for a strong, competitive, and carbon-free European economy. […] Our entire strategy is geared towards supporting clean hydrogen as much as possible and as soon as possible. This is our priority”.

Frans Timmermans, Executive VP of the European Commission and in charge of the Green Deal, delivered this message during a press conference on the adoption of the EU Strategies for Energy System Integration and Hydrogen, held in July 2020. The statement did not come as a surprise to those following the developments in the hydrogen sector. Hydrogen, which is expected to become a cornerstone of the low-carbon economy, is starting to take centre stage in the energy supply strategies of nations across the globe. While few claim that it is just hype, there is a growing consensus on hydrogen (or rather green hydrogen) being key for a greener future. But why hydrogen? Why are corporations and governments wagering on the success of green hydrogen? And what makes this energy carrier so special that it is being deemed revolutionary?

Green hydrogen is the missing link between today’s oil-centred energy system and the renewable energy-based system of the future.

Fossil fuels have been the backbone of the global economy since the industrial revolution. For more than two centuries, the major part of our energy demand has been met by coal, oil and natural gas. In a hydrogen economy, hydrogen would replace fossil-based energy carriers where electrification is not a feasible option. As a multi-purpose fuel and feedstock, green hydrogen allows us to de-fossilise most notably the steel and chemical industries, aviation, and heavy/long-distance transport. Hydrogen can serve both as a final-use energy carrier and as a basis for hydrogen-derived products, which makes it versatile to store, transport and use. Last but not least, green hydrogen will take a key role in the renewables-dominated electricity systems of the future, as it provides grid services, storage and transmission solutions for clean energy. 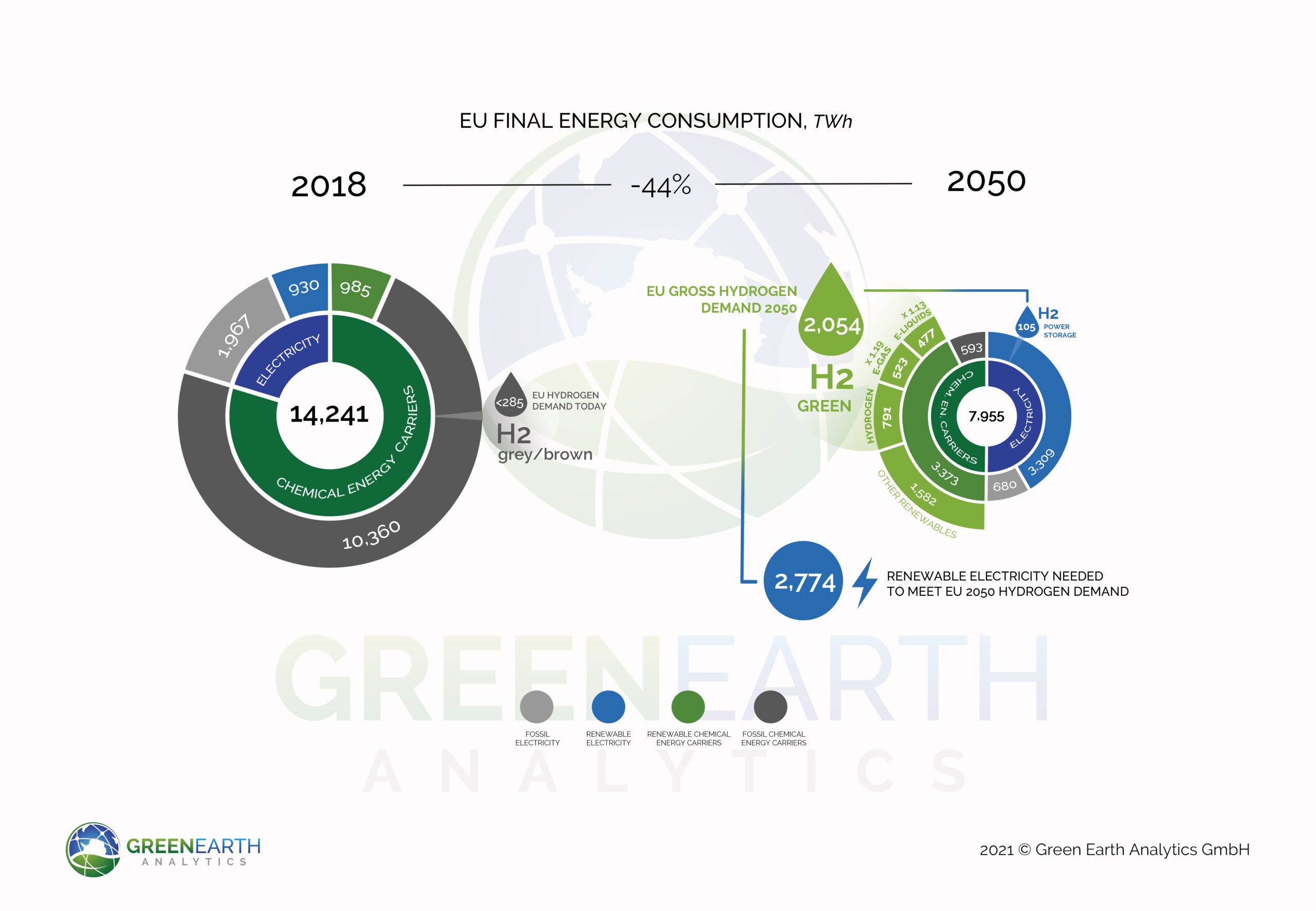 In the EU, green hydrogen will undergo a 7-fold increase by 2050, becoming the most important chemical energy carrier.

The world today consumes approximately 74 Mt of hydrogen per year, 95 per cent of which is the so-called “grey” and “brown” hydrogen produced from natural gas and coal, respectively. The EU’s hydrogen consumption in 2018 stood at 9 Mt or 285 TWh, which is less than 2 per cent of the EU’s energy mix.

In 2018, the European Commission published a strategic plan, “A Clean Planet for all,” with eight scenarios projecting the 2050 European energy system. Of the eight scenarios, the 1.5°C Technical (1.5TECH) and 1.5°C Sustainable Lifestyles (1.5LIFE) are the most ambitious: they project a 100 per cent reduction of GHG emissions by 2050 – requisite to limit the global temperature rise to 1.5°C above pre-industrial levels. Green hydrogen, produced from the electrolysis of water using renewable electricity, is expected to play a critical role if these projections are to be realised. Hydrogen and hydrogen derived e-liquids and e-gases would account for at least a quarter of final energy consumption within the EU. Hence, thirty years from now, the EU final energy demand for green hydrogen shall be an estimated 791 TWh, with the residential and services sector accounting for nearly 10% of the total. Adding the hydrogen requirement to produce hydrogen-derived e-fuels (e.g. e-ammonia, e-methanol) and to store excess renewable electricity, we at GreenEarthAnalytics expect the total (gross) hydrogen demand to reach 2,054 TWh by 2050 – almost seven times the demand today. To meet this demand, we anticipate a renewable power requirement of 2,774 TWh for green hydrogen production alone. By comparison, the final renewable electricity consumption in 2050 is estimated at 3,309 TWh.

Sectors such as the chemical and steel industries are considered hard to de-fossilise due to the multi-stage production methods and complex chemical processes involving fossil sources. The steel industry is responsible for about 7 per cent of global CO2 emissions. This is expected to change for the better, as some of the world’s leading steel producers strive to switch to low-carbon metallurgy – some of them with the help of green hydrogen. HYBRIT, or Hydrogen Breakthrough Ironmaking Technology, a joint initiative of Swedish companies SSAB, LKAB and Vattenfall, is an example of one of the world’s first low-carbon steelmaking ventures. The project is expected to produce low-carbon steel using green hydrogen instead of coking coal for iron reduction. A consortium of LIBERTY Steel Group, Paul Wurth and SHS is working on a similar undertaking in Dunkerque, France. We at GreenEarthAnalytics are convinced that once pilot projects like these achieve critical mass and reach commercial scales, steel producers across the world will be compelled to shift towards such greener production methods.

De-fossilising transportation is also challenging. The multitude of transport applications does not allow a one-fits-all approach and thus requires a combination of solutions to substitute today’s petroleum-based fuels. While e-mobility is already gaining foothold in passenger car and light commercial vehicle segments, hydrogen finds itself uniquely placed as both a short-term transition fuel (e.g. in the form of e-ammonia blended with petrol or diesel suited to internal combustion engines), and a long-term energy carrier in fuel cell electric vehicles (FCEVs) for freight transportation (thanks to fuel-cells’ lighter and more compact footprint compared to battery electric systems). Hydrogen-derived e-fuels and FCEVs are also finding in-roads into other heavy transport applications such as buses, trains and even ships and aeroplanes. Many bus manufacturers across the world have been successfully operating hydrogen-powered city-buses in partnership with local transport corporations. Railway giant Alstom completed passenger operation tests of its hydrogen-based self-propelled commuter train, which will soon ply the tracks in Austria and Germany. Meanwhile, the shipping industry is exploring methods towards transitioning to e-ammonia or e-methanol as green maritime fuels. In the aviation sector, Airbus, as well as new specialised companies – most notably ZEROAVIA – are developing hydrogen-powered aircraft to leapfrog into an era of zero-emission flights. Yet, it may take close to three decades for hydrogen-based aviation technologies to mature and for major airlines to modernise their fleets. Therefore, the aviation industry puts big hopes on ventures like Norsk e-fuel – a consortium of Climeworks, Paul Wurth, Sunfire and Valinor – a facility in Norway, that will provide a hydrogen-derived and a carbon-neutral substitute for fossil jet fuel.

Hydrogen as an alternative to massive curtailment measures. The flexibility in production and storage of green hydrogen is key to the further development and expansion of a renewables-based electricity grid. By 2050, 80 per cent of the EU’s electricity is expected to be generated from renewable sources. However, the production of renewable energy from solar PV and wind turbines is intermittent and significantly affects the stability of electricity grids. Storage facilities could flatten fluctuations in electricity generation and balance the demand and supply of energy. While Li-ion batteries could occupy the short-term niche, hydrogen and other e-fuels could be a viable long-term storage solution. In the future energy scenarios discussed above, the European Commission projects deployment of up to 105 TWh (5% of the gross demand) of hydrogen storage to store excess renewable electricity for use during peak hours with less or no power generation.

Hydrogen and hydrogen-derived e-fuels as a medium to transport energy. Hydrogen being gaseous allows us to take advantage of the existing gas pipeline and fuelling infrastructure. A liberal estimate by Siemens Energy and others in a 2020 report suggests the existing gas network in Europe and Germany to be gradually retrofitted with suitable pipes and pumps to transport hydrogen, at only 15 per cent cost of a greenfield hydrogen network. The GET H2 Nukleus project in Germany is looking to do so – in its pilot phase, 130 km of existing gas pipelines will be fully upgraded for transporting hydrogen.

The scenarios from the European Commission  discussed here can be considered normative. They depict the “big” picture of the future and suggest ways to achieve climate targets and their respective implications. The projections set the stage for the upcoming revolution in the energy sector and the pioneering role hydrogen plays in it. With the rise of the hydrogen economy, the classic energy market supply-chain, starting from resource extraction to refining and export, will give way to a more diversified hydrogen chain, including new links such as carbon capture and electricity storage. Today’s energy market giants – the oil and gas corporations – are forced to rethink their business strategies, making room for innovations and new players.

The emerging prospects make it clear that hydrogen will change the energy landscape as we know it. And this change has already begun. The winners of this incipient race will be those who can best assess the opportunities green hydrogen is revealing and integrate them into the green economy.

Learn more about the first commercial green hydrogen projects and the companies involved in our upcoming report Hydrogen Pioneers 2021.